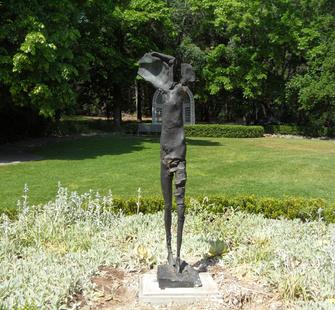 Made possible through support from

The Jo and Barry Ariko Fund
for Artistic Programs

Courtesy of Dolby Chadwick Gallery and the Estate of Stephen De Staebler.

Acclaimed Bay Area sculptor Stephen De Staebler first began an extended series of winged figures he termed “angels” in the 1980s. For the artist, the figure of the angel symbolizes a connection between spirit and matter. Winged figures are a metaphor for the human condition: his angels do not fly—they are terrestrial beings—but they still try to transcend their earthly predicament. They are, in his words, “a dark optimism in the midst of pessimism.”

In contrast to the outstretched wings of Winged Figure Ascending, Figure with Stunted Wing conveys a more pessimistic view of the human experience: one that is marked by loss, suffering, and failure. Yet a stunted wing is still a symbol of radical resilience and optimism in the face of life’s trials and tribulations.

Art historical antecedents for De Staebler’s winged figures might be traced to the Hellenistic Greek sculpture known as the Winged Victory of Samothrace, a second-century BCE fragmentary statue depicting Nike, the Greek goddess of victory.