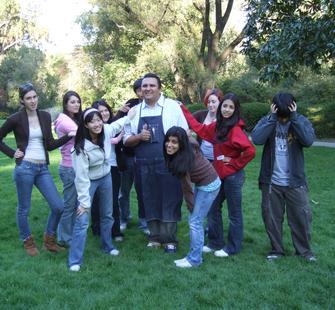 Get Flash to see this player.

As part of Montalvo Arts Center’s commitment to the Next Generation, the Teen Council was launched to provide an avenue for teens to work with world-class artists in the creation of original programming exploring social concerns of our time.

In 2007, the Teen Council’s inaugural year, Montalvo commissioned artists Mario Ybarra Jr. and Karla Diaz to create a program for teens with the goals of increasing their understanding of a multidisciplinary sampling of the arts, to strengthen their critical thinking and observation skills, and to provide participants with new tools for articulation. The 2007 Teen Council brought together 10 highly motivated and creative teens, ages 15-17, from six South Bay high schools to serve as curators in the development of public programs and installations at Montalvo. In preparation, teens participated in a 10-week series of workshops designed to encourage new ways of seeing and engaging with their community. Workshops included writing and storytelling, intergenerational interviews with the Montalvo Service Group (MSG), t-shirt design, the art of zines, toy sculpture, and intervention and performance art.