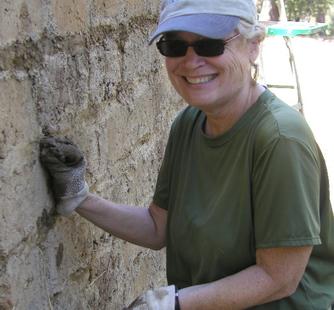 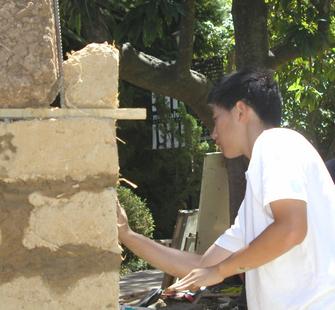 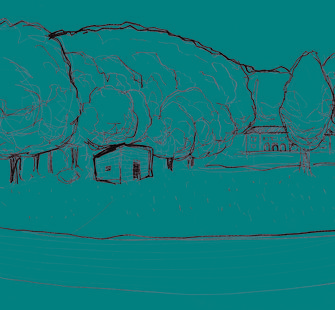 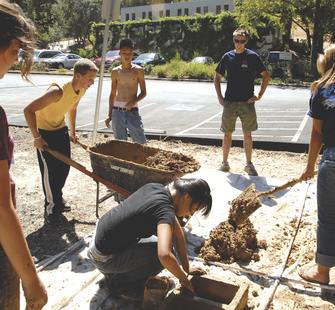 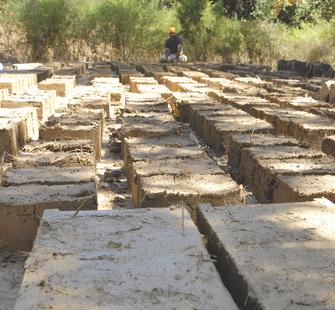 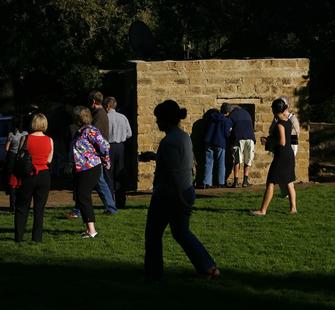 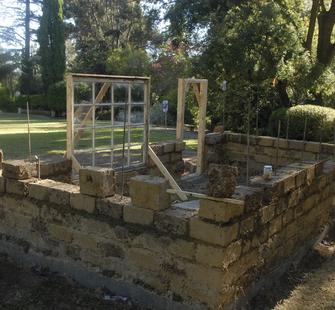 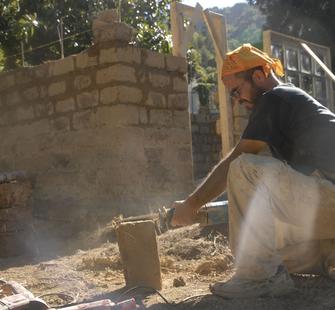 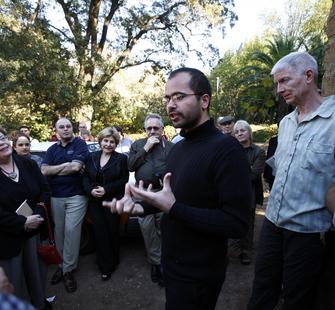 Al Dar al Iraqi is a temporary rural structure built by artist Wafaa Bilal on the front lawn of Montalvo with the support of community volunteers. The structure is symbolic of the type of homes built and inhabited by Iraqis living in rural and impoverished areas prior to the modernization period of the 1950s and beyond (many Iraqis live in modern homes built from stone, wood and brick and similar in size to homes in the US). The interior houses a reconstructed portrayal of a domestic living space.

Bilal was forced to create a home in this style during the time he spent in a refugee camp in Saudi Arabia after the first Gulf War in 1991. Without any substantial shelter provided, he turned to this antiquated method of building a home when he was exiled from his own.

This piece speaks to the devastation of the civil and domestic infrastructure taking place in Iraq today, creating an environment that has forced its inhabitants to return to an almost pre-modern existence of failed construction, electricity and lack of safety. There are currently more than 1 million internally displaced Iraqis (according to UN estimates, there are more than 4 million Iraqis displaced by violence, the majority of whom have fled the country). Many are now living in mud brick homes in designated relief areas and refugee camps within Iraq.

The world's first civilization was established around 3500 B.C. in present day Iraq. The people who established this first civilization did so in southern Mesopotamia at a place they called Sumer. They were known as the Sumerians. The Sumerians learned to control the Tigris and Euphrates Rivers by constructing levees and irrigation canals. As a result, a stable food supply existed, and the Sumerian villages evolved into self-governing city-states. At the center of each city-state was a temple surrounded by courts and public buildings. Radiating from the all-important city center were the two-story houses of the priests and merchants, or the upper class; the one-story homes of government officials, shopkeepers and craftspeople; and the lower class homes of farmers, unskilled workers and fishermen. The city-state also included the fertile farming land outside the city wall. Since there was no building stone and very little timber in Sumer, the people constructed their homes, public buildings and city walls out of sun-dried mud brick. Originally the temples at the center of each city-state were built on a platform. As time passed, these platform temples evolved into temple-towers called ziggurats that housed each city-states god or goddess. The ziggurat was the first major building structure of the Sumerians. Constructed of sun-baked mud bricks, the ziggurats were usually colorfully decorated with glazed fired bricks.

Today, these 2,000-year-old Sumerian cities have been torn apart and plundered by looters and the use of ancient sites and cities as military bases. The ancient city of Ur –cited in the Old Testament and believed to be the home of the prophet Abraham, is currently being used as a US military base, with ancient walls and ruins ruined under the weight of armored tanks and vehicles. Teams of looters have systematically stripped ancient Mesopotamia of its artifacts and wealth, excavating and selling pieces to private collectors that, if excavated properly and protected, could have provided extensive new information concerning the development of the human race.