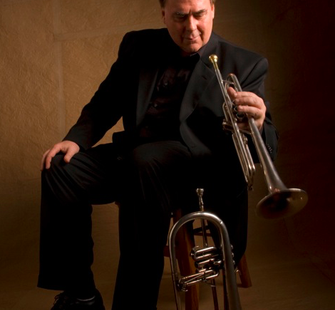 Native Detroiter Walt Szymanski has enjoyed a vast and exciting career of over 40 years. From his earliest days as a young choir singer he knew that his mission in life was to develop his musically artistic talent that had been bestowed upon him by the creator.

Following his college years at Oakland University’s famed Afram Jazz program under the direction of Marvin “Doc” Holladay (studying trumpet with Herbie Williams and Marcus Belgrave) he began recording and touring with some of Motowns’ legendary acts including Johnny Taylor, the Temptations, the Four Tops, Martha Reeves, Parliament Funkadelics and Aretha Franklin. He also was a founding member of Impact, a popular and cutting edge jazz quintet for which he penned numerous compositions.

In the early 1980’s, after brief tours with Ray Charles and the Duke Ellington Orchestra (under the direction of Mercer Ellington) Walt was chosen by drum legend J.C. Heard to be his musical director as well as arranger and composer. Together they created the J.C. Heard Orchestra and employed Detroit’s finest musicians and performed extensively with jazz giants Dizzy Gillespie, Milt Hinton, Buddy Tate, Ahmad Jamal and Max Roach. Also at this time he held the position of Artist in Residence for the Detroit Dance Collective, The Acoustic Arts Ensemble and Detroit Concert Choir.

Walt relocated to New York City in 1992 and quickly found himself in the company of many of the music world’s greatest practitioners. Among his associations were Clark Terry, Frank Foster, Lionel Hampton, Dizzy Gillespie, Eddie Hendersen, Kirk Lightsey, Cecil McBee, Charles Tolliver. Along with acting as principal trumpet for the Billy Strayhorn Repertoiry Orchestra at Lincoln Center He also led two extensive tours for the U.S. State Department under the banner of their Jazz Ambassador program.

In 2007 he began a relationship with Ray Chew at BET as an arranger/orchestrator for the show Sunday’s Best, working with Reverend Kirk Franklin and other gospel artists and also arranged the music for President Obama’s first inaugural ball featuring Beyonce. Walt became an orchestrator and arranger with the TV show American Idol in 2011 and in 2014 added Dancing With the Stars.

Upon relocating to Ecuador in 2010 Walt served for a season as Maestro of the Nacional Sinfonica at the Teatro Sucre in Quito and in 2011 began a 2 year tenure as professor of Jazz studies at the University of San Francisco de Quito’s (Ecuador) College of Music, an international affiliate of the Berklee School of Music in Boston. His duties included head of the brasswinds department, contemporary arranging and composition for large ensembles and director of the mini and big bands.

2016 was very busy compositionally for Walt and included the composition and performance of a trumpet concerto plus orchestra written in a tribute to his hometown of Detroit, MI entitled “Motor City Reflections” which was premiered by the Orquestra Sinfonica Nacional del Ecuador and conducted by Andrey Astaiza