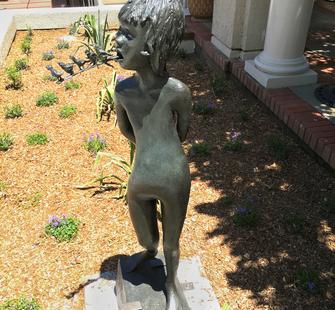 Los angles-based artist Tim Hawkinson, a native San Franciscan, earned his BA from San Jose State University, and received his MFA from the University of California, Los Angeles. Hawkinson is renowned for creating complex sculptural systems through surprisingly simple means. His fascination with music and notation is often reflected in his work through tuned and assembled cardboard tubes and everyday items. The source of inspiration for many of his pieces has been the re-imagining of his own body and what it means to make a self-portrait of this fictionalized body. His works also evoke his obsession with life, death, and the passage of time. His work has been exhibited in numerous International exhibitions, including the 1999 Venice Biennale, as well as at the Massachusetts Museum of Contemporary Art; The Power Plant, Toronto, Canada; the 2002 Whitney Biennial, New York, NY; the 2003 Corcoran Biennial, Washington, DC; and The Getty Center, Los Angeles. In 2005, the Los Angeles County Museum of Art organized a retrospective of his work.