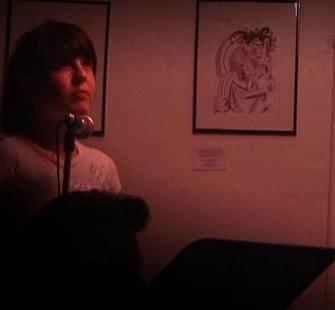 Stephanie Young's books of poetry include her lyric first collection, Telling the Future Off (Tougher Disguises, 2005) and Picture Palace (in girum imus nocte et consumimur igni, 2008), which brings together poetry, prose and performance texts constructed alongside scenes from film. Young has performed her movietelling pieces at CalArts, and Yerba Buena Center for the Arts, and she has written about the appearance of this performance practice in contemporary poetry communities.

With Juliana Spahr, Young has worked on a number of projects considering feminism and experimental poetry. Their book, A Megaphone: Some Enactments, Some Numbers, and Some Essays about the Continued Usefulness of Crotchless-pants-and-a-machine-gun Feminism ChainLinks (publisher of/ A is Megaphone) a collection of several enactments Young and Spahr did between 2005 and 2007. In these enactments, they tried to think with the playful dogmatism of the feminist tradition in order to locate what might still be useful today about the somewhat beleaguered "second wave"   feminist traditions. To that end, Spahr and Young lectured in Oulipian slenderized baby talk about figures such as Carolee Schneemann and   Marina Abramovic; they counted the numbers of women and men and transgendered people in various poetry anthologies; and they invited writers from outside the US to talk about being a writer where they live (over seventy-five writers responded, from around the world).