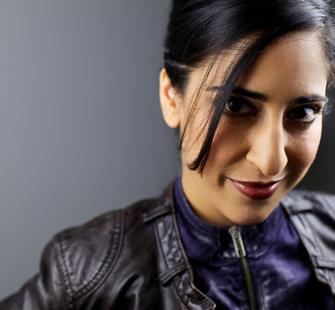 Sheetal Gandhi’s work has been described as “eloquent, inventive, virtuosic dance-theater” by the Philadelphia Inquirer utilizing “incisive commentary offset by brilliant touches of humor” (Narthaki).  She is a multi-hyphenated artist (singer, dancer, choreographer, actor) with a career that has spanned genres and disciplines including work as a creator and performer in Cirque du Soleil’s Dralion, playing a leading role in the Broadway production of Bombay Dreams, dancing throughout Ghana with the traditional West African dance company Novisi, and singing with the New York based, all-female a cappella group, Anamcara.

Today, Gandhi is based in Los Angeles where she initiates her own creative projects, choreographs and acts for theater, film, and television, and offers workshops and school-assembly shows that serve to educate, inspire and entertain.  She holds an M.F.A. in dance from UCLA and teaches at various universities.  She collaborates with artists and theater companies including Cornerstone Theater, Dan Froot and the Who’s Hungry project, Post Natyam, South Coast Repertory, and more.

Gandhi’s acclaimed solo dance-theater work, Bahu-Beti-Biwi, which received the 2012-13 NDP Touring Award has been performed widely across the U.S. and in over 5 countries. She was also awarded two prestigious artist residencies in 2014 (Djerassi and Montalvo), the 2012 Annenberg Community Beach House Choreography Residency, a 2011 COLA Individual Artist Grant, the LA Dance Advance Grant, and was a participating member of the 2012 Choreographers in Mentorship Exchange (CHIME) Program.  Her passion for intercultural exchange has been supported by the 2010 Asia Pacific Performance Exchange (APPEX), a Cultural Exchange International (CEI) fellowship in Amsterdam, and an invitation to attend the Tanzmesse International Festival for Contemporary Dance in Dusseldorf, Germany.

Gandhi received her formal training in dance studios in Northern California, New York City and at the University of California Irvine (UCI).  While here, she studied with and performed for her most influential dance mentor to date, world-renowned modern dance choreographer, Donald McKayle.  McKayle encouraged Gandhi’s love for rhythm and character work.  This love for rhythm and culture inspired Gandhi to spend a year in Ghana, West Africa, where she was deeply immersed in the music, dance and culture of the region.  It also returned her back to her roots in India for an extended time to study the North Indian classical dance form, Kathak.

Gandhi’s commitment to artistic innovation, personal transformation and social change continues to lead her to work with various artists and non-artist communities - both locally and abroad - where she strives to build bridges across class, gender, age and cultural differences through the arts.