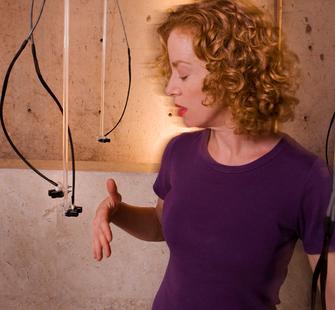 As a former dancer turned new media artist, Waisman is fascinated by the critical roles that movement and sensation play in forming thought. Scientists call such “embodied thinking” the pre-conscious scaffolding for all human logic. Waisman's interactive sound installations, performances and videos pose questions about such embodied thinking, while focusing on related issues such as surveillance, nanotechnology, machine-human feedback loops, “invisible” laborers, body language and training. Her work asks experientially: What kinds of intellectual and social programming are built into our culturally entrained gestures, and how might we hack that training, letting our bodies to open our minds?

In 2015, Waisman created and directed a think tank considering intelligence from non-anthropocentric perspectives, hosted in the LAP. Supported generously by the SETI Institute Artist-in-Residence Program and Montalvo Arts Center, the intimate gathering of top NASA and SETI scientists, mixed with artists, dancers, and other researchers in intelligence, was a first in the field. More info here.

Following her 2015 year-long residency in SETI Institute’s AIR program, Waisman is preparing collaborative artworks and public laboratories to further explore non-human intelligences - ranging from the microbial to plant, animal to extra-terrestrial - with an eye to finding relationships between small scale movements (those of single cells and their components) and the so-called “higher” logics built upon those movements.

Waisman has exhibited in museums, galleries and public spaces internationally; venues include the California Biennial at OCMA, the Museum of Image and Sound in Sao Paulo, Brazil, the CECUT in Tijuana, the House of World Cultures in Berlin, LAXART in Los Angeles, the Zero1 Biennial, ISEA, the San Diego Museum of Art, the Beall Center for Art & Technology. She currently has a large-scale interactive installation up at The New Children's Museum in San Diego through 2016. Selected works can be seen at http://www.ninawaisman.net