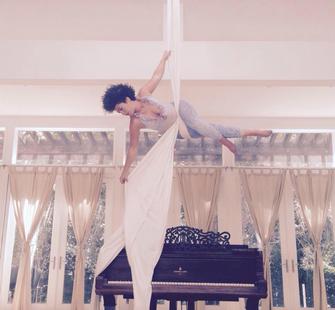 Nikki Borodi, songwriter, musician and acrobat, was born in Cleveland, Ohio in the late 1970s.  She attended the Cleveland Institute of Music in Cleveland, Ohio, and Hunter College in New York, New York where she earned a BA with a double-major in Music and English, and a minor in Ceramics.  She currently resides and works in Oakland, California.

Borodi performances have been presented: at the New York International Film and Video Festival at Madison Square Garden, New York, New York; with Morcheeba at Roseland, New York, New York; for TedxBerkeley at Zellerbach Hall, Berkeley, California; at the New Parish, Awaken Café and the Marsh Theater in Berkeley, California; at the Supper Club in San Francisco, California; and at the 2015 Maker’s Faire in San Mateo, California. She has provided entertainment for corporate entities such as AOL/Time Warner, Lucas Films and Zynga.  She is currently developing a Circus Rock Show, as well as numerous musical videos.