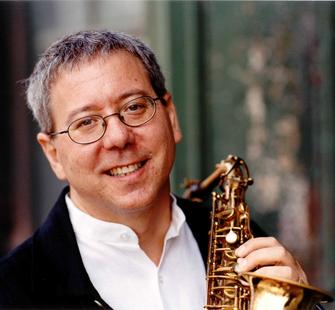 Marty Ehrlich is one of the most celebrated artists of his generation, critically acclaimed as both composer and player. Equally fluent on clarinet, saxophone, and flutes, Ehrlich has been hailed as “one of the most formidable multi-instrumentalists since Eric Dolphy…the jazz dream musician” (The Village Voice). The New York Times calls him “one of the premier melodicists of his generation,” and The Nation “one of his time’s most original thinkers (with) a rare and wonderful talent, a now yearning, now biting attack and a stunningly voice-like expressiveness.” Jazz Zeitung states: “If there is a believable poetic sensibility in jazz, you will find it with Marty Ehrlich.” The Jazz Journalist Association honored him as Wind Player of the Year in 2001 and as Clarinetist of the year in 2003. In 2004, Ehrlich was awarded a Guggenheim Foundation Fellowship in Composition.

Since moving to New York in 1978, Ehrlich has performed his compositions throughout America, Europe and Canada with numerous ensembles. Marty’s latest recording on Palmetto Records, “News on the Rail” features a sextet and is being hailed as one of the best albums of 2005 (JazzTimes). The Traveler’s Tales Group is a quartet of two horns and rhythm section. Its most recent recording, Malinke’s Dance, was chosen as one of the ten best recordings of 2001 in the Village Voice. The Dark Woods Ensemble features Ehrlich’s woodwinds with cello and bass. Its most recent release, Sojourn, received an award from Absolute Sound Magazine as one of the three best recordings of the year. Ehrlich has recorded 14 CDs with these ensembles on the Palmetto, Enja, New World, Omnitone and Tzadik labels.

In 2003, Ehrlich released a CD of an extended composition for 23 musicians called The Long View. During 2002, this work was played in exhibition at Harvard University with the paintings of a long time collaborator of Ehrlich’s, the visual artist Oliver Jackson. The Boston Phoenix called the piece “one of a handful of integral long-form works in jazz, standing beside those of the likes of Hemphill, Mingus and Ellington.” Ehrlich has also been active as a collaborator with other composers. He currently works with pianist Myra Melford in the Melford/Ehrlich Duo and in a trio with Andrew Cyrille and Mark Dresser, called C/D/E. The duo recently released Yet Can Spring on Arabesque, and the trio a self-titled CD on Pao. He has also released duo recordings with Muhal Richard Abrams, Mike Nock, Anthony Cox and John Lindberg.

As a composer, the New York Composer’s Orchestra, the Boston Jazz Composer’s Alliance, The Lydian String Quartet, The Rova Saxophone Quartet, The Kitchen House Blend Orchestra, the New York String Trio and pianist Ursula Oppens have commissioned works from him. In 1995 he was composer-in-residence at the Isabella Stuart Gardner Museum in Boston and in 2000 he was the Peter Ivers Visiting Artist at Harvard University and artist-in-residence at Dartmouth Univeristy. Ehrlich has taught at New England Conservatory of Music and Hampshire College.