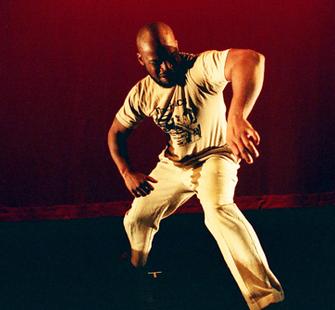 Marc Bamuthi Joseph is an educator, performer, and the artistic director of The Living Word Project, a theater company dedicated to the aesthetics of post-hip hop performance. In the Fall of 2007, Bamuthi graced the cover of Smithsonian Magazine after being named one of America's Top Young Innovators in the Arts and Sciences. He is a National Poetry Slam champion, Broadway veteran, GOLDIE award winner, featured artist on Russell Simmons' Def Poetry on HBO and inaugural recipient of the United States Artists Rockefeller Fellowship. He has entered the world of literary performance after crossing the sands of "traditional" theater, most notably on Broadway in the Tony Award winning The Tap Dance Kid and Stand-Up Tragedy. His evening-length works have been presented throughout the United States and Europe and include Word Becomes Flesh, Scourge, De/Cipher and No Man's Land. Bamuthi's current solo piece, the break/s, co-premiered at the Humana Festival of New American Plays and the Walker Arts Center in the Spring of 2008.  His work has been enabled by several prestigious foundation awards including grants from the Ford Foundation, the Center for Cultural Innovation, Creative Capital, the National Performance Network Creation Fund, the Wallace A. Gerbode Foundation, the Creative Work Fund, the Rockefeller MAP Fund, the NEA, the Hewlett Foundation, and a Dance Advance award from the PEW Foundation. A gifted and nationally acclaimed educator and essayist, he has lectured at more than 100 colleges and universities, been a popular commentator on National Public Radio, and has carried adjunct professorships at Stanford University, Mills College, and the University of Wisconsin. A resident at ODC Theater, YBCA, and Intersection for the Arts in San Francisco, Bamuthi's proudest work has been with Youth Speaks where he mentors 13-19 year old writers and curates the Living Word Festival for Literary Arts. Mr. Joseph's next project, red black and green: a blues performatively documents the eco-equity movement towards green collar jobs in Black neighborhoods.