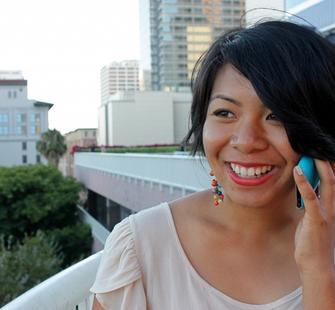 Janice Lobo Sapigao is a Pinay poet, writer, and educator from San José, CA. She was named one of the San Francisco Bay Area’s 2017 Women to Watch by KQED Arts.She is the author of two books of poetry: Like a Solid to a Shadow (Timeless, Infinite Light, 2017) and microchips for millions (Philippine American Writers and Artists, Inc., 2016) and two other chapbooks: you don’t know what you don’t know (Mondo Bummer Books, 2017) and toxic city (tinder tender press, 2015). She is a VONA/Voices Fellow and was awarded a Manuel G. Flores Prize, PAWA Scholarship to the Kundiman Poetry Retreat. She is the Associate Editor of TAYO Literary Magazine. Her work is also published or forthcoming in online publications such as The Offing, NBC Asian America, Waxwing, Luna Luna Magazine, CCM-Entropy, the Asian American Writers’ Workshop’s The Margins, and AngryAsianMan.com, among others. She has reviews on The Volta Blog and Jacket2.

She earned her B.A. in Ethnic Studies with Honors and she was a Ronald E. McNair Scholar at UC San Diego. She earned her M.F.A. in Critical Studies/Writing at California Institute of the Arts (CalArts). She co-founded an open mic in Los Angeles called the Sunday Jump and was a Finalist in the Katipunan Poetry Slam. She is an alumna of  Naropa University’s Summer Writing Program. She teaches English at San José City College.