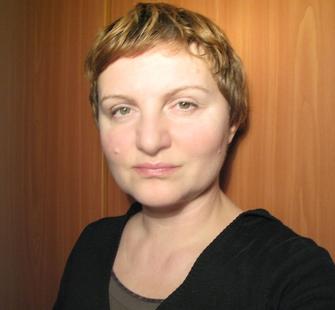 Branka Cvjeticanin was born in Zagreb, Croatia. She was educated in different forms of performing arts. She graduated at the MAPA Moving Academy for Performing Arts, Amsterdam. In 1998 she was awarded by the NUFFIC and Gulliver Exchange program for an internship at Oerol Festival, Terschelling where she was introduced to the site-specific theatre directing and installation art in situ. Most of Cvjeticanin’s work is based on particular circumstances in situ, public art in relation to body, movement and space framed by particular economy, policy, history or just circumstances or nature, and that is why she is choosing different media to express or stress out particular concepts (such as live act, choreographic scores, light installations, photography, artist talk performance...). Since 1997 she is an independent producer in a field of visual arts and in 1999 she initiated an idea of the PolygonOS – an organisation as a medium for sculpturing but also a platform for international exchange. From the very beginning of her artistic work she made numerous international collaborations. In 2006 she accomplished PhD on Bauhaus College, Dessau on the topic of UN Urbanism. Cvjeticanin works internationally and her works were supported by different local and international government and non-governmental institutions, foundations and individuals. Cvjeticanin is a member of the Croatian Association of independent artists - HZSU, Croatian Association of the Applied Visual Artists – ULUPUH, Oracle – network of European Arts Managers, and Culturelink network.