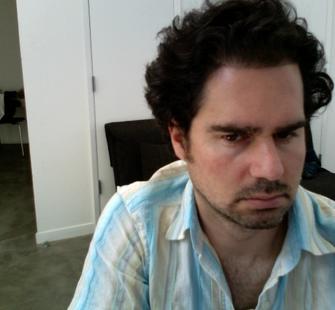 Anthony Discenza was born in New Jersey in 1967 and currently resides in Oakland, CA. He received his undergraduate degree in Studio Art at Wesleyan University in 1990 and an MFA at The California College of Arts and Crafts in 2000. Working primarily in video, Discenza’s work has focused on the ubiquitous presence of mainstream media in contemporary life. Extracting and subverting material taken from commercial film, television, and the Internet, he has produced a series of single-channel works and projection-based video installations that amplify both the assaultive and anaesthetizing effects of commercial media; more recent works have begun to explore the relationship between text and visual representation. In addition to his personal work, Discenza devotes a great deal of time to HalfLifers, an ongoing collaboration with longtime friend and fellow video artist Torsten Z. Burns. Mr. Discenza’s solo and collaborative work has been shown at numerous national and international venues; past screenings and exhibitions include Distributed Memory at the Getty Center, Artists of Invention: A Century of CCA at the Oakland Museum, Reprocessing Information at SFMOMA, Remembrance at the Australian Center for the Moving Image in Melbourne, and the 2000 Whitney Biennial. Additionally, he has exhibited at The Museum of Modern Art in New York, New Langton Arts, The Sara Meltzer Gallery, The Pacific Film Archive, The Temporary Contemporary in London, the Belkin Gallery in Vancouver, and Hosfelt Gallery in San Francisco. Discenza has also screened work in The New York Video Festival, CinemaTexas, The Anne Arbor Film Festival, The Thaw Festival of Film, Video and Digital Media, Stuttgart Filmwinter, and the Impakt Festival in Utrecht. Discenza currently works as a Senior Lecturer at the California College of Arts. He is represented by The Catharine Clark Gallery in San Francisco and the Video Databank of Chicago.

“Discenza's art brings the tradition of painterly abstraction into tension with the infinitely vast storehouse of mass media imagery. Using the recording and delivery mechanisms of digital technology, Discenza creates impressionistic and seductive works that simultaneously suggest the numbing, narcotic effect of the unending stream of moving images coursing through our daily lives.”

“Anthony Discenza's single-channel work appropriates and redefines the familiar flow of the television transmissions we all know so well. This transformation affects our relationship to these apparently 'innocent' images, investing them with ominous significance. The flickering of lurid comedy shows, pre-packaged and homogenised news programmes, formulaic sports entertainment, are all laid bare as they are destroyed, revealing an underlying sadness and poignancy.