Montalvo Box Office: 408-961-5858
Service fees may apply and are non-refundable.
Montalvo donor discounts are offered on select events; donors, please Log In to access special ticket prices. Box Office is open one hour prior to all show times. 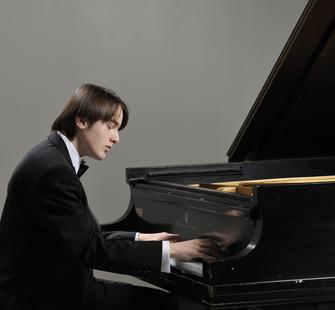 "The 20-year-old Daniil Trifonov, fresh from his victory at the International Tchaikovsky Competition in Moscow, showed astonishing skills in works by Scriabin, Chopin and Liszt...this young man is a formidable virtuoso." --The New York Times

"...he has everything and more. What he does with his hands is technically incredible. It's also his touch - he has tenderness and also the demonic element. I never heard anything like that." -Martha Argerich, Financial Times

"Mr Trifonov has scintillating technique and a virtuosic flair. He is also a thoughtful artist...he can play with soft-spoken delicacy, not what you associate with competition conquerors." -Anthony Tommasini, The New York Times

Held every five years, the highly acclaimed International Tchaikovsky Competition has been regarded internationally as one of the major events in the global music community for more than 50 years. The gold medal winner of the piano section, Daniil Trifonov, picked from 122 competing musicians from 25 countries, will perform for an exclusive engagement at Montalvo for one night only.

Daniil Trifonov began his musical studies at the age of five. He studied at Moscow Gnesin School of Music in the class of Tatiana Zelikman (2000-2009), teacher of such artists as Konstantin Lifschitz, Alexander Kobrin and Alexei Volodin. From 2006 to 2009 he also studied composition and has continued to write piano, chamber and orchestral music since then. Since 2009, he has studied piano at the Cleveland Institute of Music in the class of Sergei Babayan.

Trifonov will perform works by Schubert, Debussy, and Chopin.