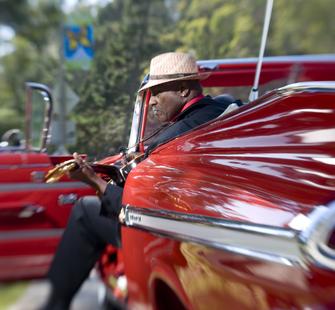 
Composer and multi-instrumentalist Taj Mahal is a two-time Grammy winner and one of the most influential American blues and roots artists of the past half-century.

In his never-ending exploration of the complex origins and underpinnings of American music, he has forged a four-decade career by gathering and distilling countless musical traditions from a range of geographical and cultural sources: the Mississippi Delta, the Appalachian backwoods, the African continent, the Hawaiian islands, Europe, the Caribbean and so much more. Taj Mahal doesn’t just stand at the crossroads. He is the crossroads.

Taj released a series of recordings with the Phantom Blues Band, including Dancing the Blues (1993), Phantom Blues (1996), and the two Grammy winners, Señor Blues (1997) and the live Shoutin’ in Key (2000). Overall, he has been nominated for nine Grammy Awards.

Four decades have done nothing to dilute Taj Mahal's energy quotient. “The one thing I’ve always demanded of the records I’ve made is that they be danceable,” he says.

Taj continues to tour internationally, doing as many as 150 shows per year throughout the U.S., Europe, Australia, New Zealand and beyond.