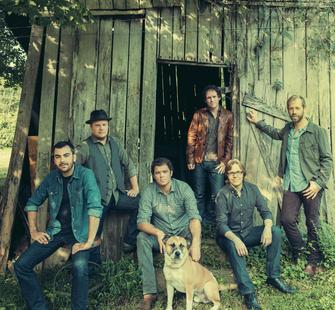 Montalvo Arts Center is proud to pour premier wines by fine Santa Cruz Mountains wineries at all of our Carriage House concerts.

Check the menu posted at our concessions bars to view our offerings for each performance.

“True bluegrass... is a thing of art, and the Steep Canyon Rangers are the genre’s current Rembrandt” —Examiner.com

Winners of the Grammy Award for Best Bluegrass Album in 2013. With smooth vocals, smart songwriting, ferocious instrumentals, and jaw-dropping harmony, the Rangers are bringing bluegrass to music lovers across the USA and around the world. Don’t miss this foot-stomping, roof-raising, breathtaking performance.

It all started at the University of North Carolina at Chapel Hill, where Woody Platt, Mike Guggino, Graham Sharp, and Charles R. Humphrey III met and became friends. Though none of them were music majors—they were all pursuing professional degrees—the boys discovered fairly quickly that they had a love for music in common. They started getting together for weekly jams at Guggino’s cabin in the hills outside of Chapel Hill.

As their jam sessions became more frequent, they also became more musically astute, learning each other’s grooves and finding they could predict each other’s next move. Because they all played acoustic music, they started gravitating toward bluegrass tradition—an area which was fairly new to most of them, but which they found to be a perfect fit for their energy and musicality. They began to learn some of the old bluegrass standards, just to try them on for size, then started playing those songs around town. Primarily, the Steep Canyon Rangers’ gigs were full of original songs written by various members of the band (they all contribute originals), but occasionally, they’d throw in a bluegrass cover or a Grateful Dead tune, depending on the time and the place, and the audience.

As graduation neared, they brought in fiddler Nicky Saunders to round out the sound, and began to realize there was a possibility they could make a real mark in a career as musicians. Even though each of them had gone into college choosing a path which would send them in the direction of a “real job,” their musical pursuits were proving more fruitful and fun than they’d ever expected.

After graduation, they started touring and eventually left their “real jobs” altogether to pursue music full time. They made their first album independently and then slowly, surely, climbed the ladder of indie labels and distribution deals until they managed to score a deal with Rebel Records and then with Rounder Records for their collaborative backing band projects with Steve Martin. The first recording with Martin earned the group a Grammy nomination, which was followed in 2012 with a Grammy win for their album Nobody Knows You.

Montalvo Arts Center is proud to pour premier wines by fine Santa Cruz Mountains wineries at all of our Carriage House concerts.

Check the menu posted at our concessions bars to view our offerings for each performance.