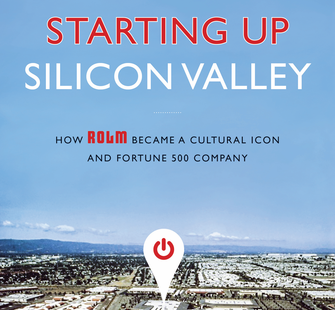 From Fruit Shed to Fortune 500, the Inside Story of ROLM and its Influence on Silicon Valley

Decades before Facebook, four men were designing the “world’s toughest computer” in a prune-drying shed in the orchards of Santa Clara County. By 1984, ROLM’s technological innovations had disrupted two industries: military computers and telecommunications. That year, ROLM was acquired by IBM in the biggest deal Silicon Valley had seen. Between founding and merger, ROLM had set the benchmark for Silicon Valley’s unique work/play culture. Its influence extends today in campuses like Google, Cisco, eBay and more.

Katherine Maxfield's new book Starting Up Silicon Valley: How ROLM Became a Cultural Icon and Fortune 500 Company has received a starred review from Kirkus Review:“…an engaging story…will satisfy anyone captivated by Silicon Valley…a corporate history unusual in its candor…intense emotions and exuberant personalities…Few authors have Maxfield’s knack for describing both the forest and the trees…enough drama for a movie.”

Join us in the historic Villa for a book talk, signing, and reception with Ms. Maxfield. Copies of the book will be available for purchase.