Art of the Silk Road: Past and Present 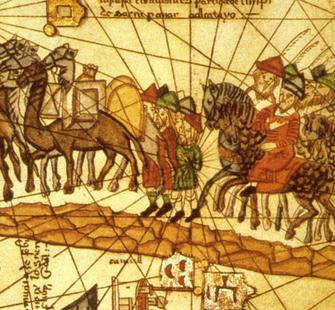 Join Dr. Mariachiara Gasparini, noted cultural historian, as she presents a fascinating overview of the art and culture of the Silk Road, from 2,000 years ago to today.

The Silk Road was an ancient network of trade routes that connected regions of Eurasia, stretching from the eastern shores of Asia to the Mediterranean Sea. For centuries, it served as a thoroughfare that linked China, Japan, India, the Middle East, the Roman Empire, and, eventually, European kingdoms.

It was a conduit of economic, cultural, religious, and artistic exchange, uniting enormous empires—perhaps most famously, it was the route that Marco Polo traveled to investigate the Near and Far East. The Silk Road was also a fertile region of cultural output in its own right, where great trading cities blossomed and different ethnic groups lived side by side in relative harmony.

Today, what was once the Silk Road is territory belonging to various nation states. Some sections run through war zones. World Heritage Sites in the area are spaces of very real contention, subject to various acts of cultural “inappropriation” on the part of the west, including looting, misguided restoration, and removal of objects to foreign museums. They are also vulnerable to destruction by militant forces, who demolish these sites (places like Palmyra, Bamiyan, and Turfan) as acts of cultural terrorism.

Dr. Gasparini will be your guide, helping you in navigating this fascinating terrain with a multimedia presentation, including newspapers, videos, texts, and cultural artifacts to study.

ABOUT THE LECTURER: DR. GASPARINI

Mariachiara Gasparini received her Ph.D in Transcultural Studies: Global Art History from the University of Heidelberg, Germany, in 2015; her Master degree in East Asian Art from the Sotheby’s Institute of Art in London, in 2011; and her Magister degree in Oriental Languages and Civilizations from the University of Oriental Studies in Naples, Italy, in 2005. Her interests include historical, theoretical, and visual investigation in the history of Asian and Eurasian art and culture. She has conducted extensive fieldwork in Asia and presented the results of her research at conferences and workshops worldwide.