in Conversation with Katherine Maxfield + Concert with Petra Haden 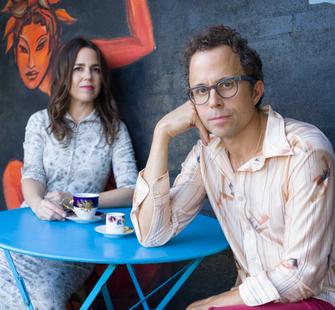 Grammy-winning singer-songwriter Harris has been recording music for more than 20 years.  A “staple of New York's East Village music scene,” his sound—hailed by critics as “exquisite chamber rock” blending “modern Americana and jazz-informed folk-pop”— has drawn comparisons to Paul Simon, Serge Gainsbourg, and Neil Young. His songs have been recorded by artists including Smokey Robinson, Willie Nelson, Norah Jones, and The Black Keys.

Together with Katherine Maxfield, Harris will discuss the particular creative process that fuels the songwriter’s craft. The second act of the evening is an intimate concert with Harris and vocalist Petra Haden, with whom Harris released the album It Seemed Like a Good Idea – Petra Haden Sings Jesse Harris earlier this year.

Originally from New York City, Harris is a singer, songwriter, guitarist, and producer of artists from all over the world. He launched his career in the mid-1990s—releasing records with his first band Once Blue and playing guitar on albums by pop stars like Lisa Loeb and Jewel. In 2003 he received the Grammy Award for “Song Of The Year” for penning Norah Jones’s breakout hit “Don’t Know Why” (among four other songs for her debut album Come Away with Me).

As a solo artist, Harris has 13 albums to his name. He has collaborated with the likes of Bright Eyes, Cat Power, Feist, John Zorn, and Emmylou Harris on various projects. In 2006, Harris wrote the soundtrack for—and appeared in—Ethan Hawke's film The Hottest State. The resulting soundtrack album was named one of "The Top 10 CDs of 2007" by The New York Daily News.

The daughter of legendary jazz bassist Charlie Haden, Petra Haden is a vocalist and violinist whose musical affinity has led her far and wide, from jazz to classical to folk to punk. She has recorded with the Decemberists, Beck, Green Day, Foo Fighters, and jazz guitarist Bill Frisell. Although she appears on many artists' records, her unique contribution to music—and what many consider to be her signature style—is performing songs using only her voice. In 2005, she recorded The Who's entire album The Who Sell Out, in her a cappella style, and in the process gained Pete Townshend as a fan.

About our moderator, Katherine Maxfield:

“Thank you, Katherine, for your expert conversational style!” -Armistead Maupin

Maxfield’s conversations with writers have been favorably compared to Terry Gross’ Fresh Air, City Arts & Lectures, and Celebrity Forum. Her friendly yet probing style encourages writers to reveal their writing and thought processes, delves into the world of agents and publishers, and examines interesting angles of their most recent publication.

Maxfield has a BA (economics), an MBA (marketing) and an MFA (writing). She worked for Silicon Valley’s ComQuest, ROLM Corporation, Polycom, Apple, and 3Com. Her non-fiction book, Starting Up Silicon Valley, was named a Kirkus Best Book of 2014 and was a 2015 Eric Hoffer winner in the business category. Her award-winning short fiction and personal perspectives have appeared in the San Francisco Chronicle, Ontario Review, and numerous other literary journals.