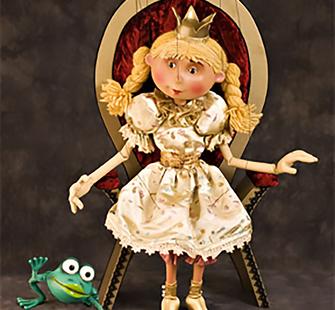 “Like stepping into a world of imagination... the things they do are amazing” —The Seattle Times

The spoiled Princess Ofelia strikes a deal with a slimy frog: if he’ll help retrieve her golden ball from the bottom of a well, she’ll grant him three wishes. Can a spoiled princess keep her word? Is there more to this frog than meets the eye? (Might he actually be her Prince Charming in disguise?) Beloved Bay Area-based puppetry company Fratello Marionettes brings the classic fairytale to life with a cast of hand-crafted, custom-made marionettes.

About the Fratello Marionettes

For over two decades, the Fratello Marionettes have been delighting audiences throughout the United States with the ancient art of performed puppetry. A creative partnership between two classically trained puppeteers, the troupe presents astonishing shows using the cabaret style of manipulation and a cast of hand-built marionettes ranging in size from one foot to three feet tall.