An Evening with Spencer Day 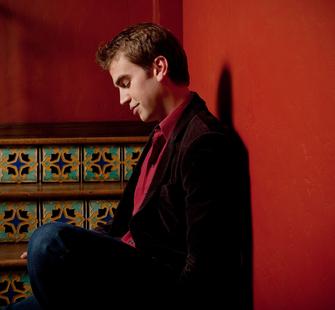 Join us before the concert in the historic Villa for a Special Valentine's Day Celebration Dinner catered by Le Papillon!

Join us at 5:30pm in the Historic Villa for a romantic Valentine's Day dinner before the concert! This elegant 3-course meal will be prepared by Executive Chef Scott Cooper from Le Papillon. The ticket price of $130 per person includes both dinner and a ticket (great seats!) to the concert in the intimate Carriage House Theatre (beverage, tax, and gratuity are not included). This event sold out last year, so don't delay!

Reservations for the dinner and concert package are required and can only be made by calling Le Papillon at 408-296-3730. The Montalvo Box Office DOES NOT sell the dinner/concert package; you must call Le Papillon to reserve your tickets to this special event!

A full vegetarian menu will be available upon request.

Vocalist-songwriter-pianist Spencer Day brought down the house when he last performed at Montalvo’s Carriage House Theatre in February 2011. At 29, he has enjoyed a musical career remarkable even for someone twice his age.  His voice inspires comparisons to that of Harry Connick Jr. and his compositions to those of Cole Porter, Paul Simon and Rufus Wainwright. His latest release, Vagabond, is a genuine crowd pleaser and demonstrates Day’s eclectic taste and remarkable ear for music.

Born in Utah, raised in rural Arizona, currently living in Los Angeles with extended residencies in New York and San Francisco, Day has called many places home. Along the way, he has wandered amid the expansive and diverse landscape of American music, developing an artistic sensibility that borrows from numerous sources: jazz, musical theater, cabaret, soul, folk, traditional pop and contemporary pop are just the tip of the iceberg. Day uses intuition and improvisation as his primary tools to craft a sound that is traditional and familiar, yet fresh and innovative at the same time, creating a blend too subtle to parse into neatly defined categories.

By his own account, Day got a bit of a late start on his journey of artistic self-discovery. Largely self-taught, he grew up listening to a wide cross-section of composers, including Cole Porter, George Gershwin, Joni Mitchell, John Lennon and Paul Simon. He also counts “all those old MGM musicals” he watched as a kid among his primary influences. He didn’t start performing in public until age 21, mostly singing standards in piano bars and retirement homes. “I was probably three or four years into that when I realized that that wasn’t totally satisfying to me,” he recalls. “I realized that I needed to write as well.” That’s when things got into high gear.

While his debut album was primarily a collection of standards, the title track from the followup recording, Movie of Your Life, won San Francisco Academy of Art University’s 2005 competition for best original song. That same year, he collaborated with improv actor Rafe Chase on a musical, Someday, Love, which premiered at San Francisco’s New Conservatory Theater. In addition to writing the score, Day also starred in the show.

Day performed at the 2007 San Francisco Jazz Festival, and has been a recurring headliner in a number of high-profile Bay Area clubs, including Yoshi’s, the Plush Room, the Great American Music Hall and the Herbst Theatre. On the opposite coast, he has earned raves for performances at the Town Hall, Joe’s Pub and the Canal Room in New York City, and the Kennedy Center in Washington, DC.

Day will perform many of his favorite songs, plus preview new selections from his upcoming album - due out in the spring of 2012.