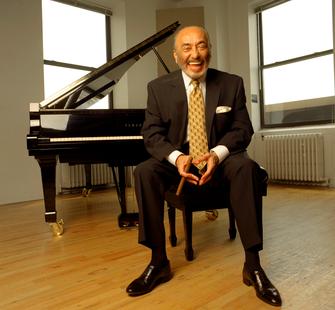 “This is music so vital and joyous…a totally celebratory sound, bouncing, shuffling, weaving and grooving along on a beat so mesmeric and soul-wrenchingly right that you want it to go on forever.”
--Linton Chiswick, Time Out London

Nine-time Grammy Award winner, Eddie Palmieri has been called “The Sun of Latin Music”.  The mark he’s carved on the history of Latin music goes unquestioned.  Part icon and part perfectionist, elder statesman Eddie Palmieri is, without a doubt, the consummate musician.

Known for his charismatic power and bold innovative drive, Eddie Palmieri has a musical career that spans over 50 years as a bandleader of Salsa and Latin Jazz orchestras. A true powerhouse of brilliance, known for his astute arranging skills and historic compositions, Mr. Palmieri has shown that time is infinite with respect to his repertoire as he continues to thrill audiences throughout the world with his legendary style. With a discography that includes 36 titles, Mr. Palmieri has been awarded nine Grammy Awards, from 1975's “The Sun of Latin Music” (the first Grammy awarded in the Latin field), through “Palo Pa ' Rumba” (1984), “Obra Maestra/Masterpiece” in collaboration with Tito Puente (2000) to “Listen Here!” (2005) and 2006's “Simptico", a collaborative effort with trumpet master Brian Lynch. Palmieri's myriad honors for his life's work in music and culture include the Eubie Blake Award, Yale University's Chubb Fellowship (an award usually reserved for international heads of state), the Alice Tully African Heritage Award, and induction into both the Bronx Walk of Fame and the Chicago Walk of Fame. In 2002, he received the National Black Sports and Entertainment Lifetime Achievement Award. Other inductees with him were Roberto Clemente, Count Basie, Max Roach, Billie Holiday and Dinah Washington. At the 1998 Heineken Jazz Festival in San Juan, Puerto Rico, the Berklee College of Music paid tribute to his contributions as a bandleader in bestowing on him an honorary doctorate. In 1988, the Smithsonian Institute recorded two of Palmieri's performances for their catalog of the National Museum of American History in Washington, D.C a rare public honor. “Caliente,” a radio show hosted by Mr. Palmieri on National Public Radio, has been a tremendous success, being picked up by more than 160 radio stations nationwide.

A 2007 Grammy Award Winner has been recognized by top placing in the Downbeat Critics and Readers Polls; highly rated reviews for his work in Downbeat, Jazziz and Jazz Times; 2005 and 2007 Grammy award nominations, and grants from the National Endowment for the Arts, Chamber Music America, and Meet The Composer.  A honored graduate of two of the jazz world's most distinguished academies, Art Blakey and the Jazz Messengers and the Horace Silver Quintet, he has been a valued collaborator with jazz artists such as Benny Golson, Toshiko Akiyoshi, and Charles McPherson; Latin music icons as diverse as Hector LaVoe and Lila Downs; and pop luminaries such as Prince. As a bandleader and recording artist he has released a series of critically acclaimed CDs featuring his distinctive composing and arranging, and toured the world with various ensembles reflecting the wide sweep of his music. He currently is on the faculty at New York University as well as conducting clinics and workshops at prestigious institutions of learning the world over.

In 1986, Lynch recorded his first album as a leader, Peer Pressure, for Criss-Cross. There followed Back Room Blues and At The Main Event [Criss Cross], In Process [Ken], Keep Your Circle Small [Sharp Nine], and a string of sideman dates with Art Blakey and Phil Woods. On each, Lynch documented his fiery, coherent tonal personality. He also made a name for himself as a composer, through numerous songs that play with and stretch harmony while never losing melodic essence and rhythmic thrust. A 1997 recording called Spheres of Influence [Sharp Nine], which earned a 4-1/2 star Downbeat rating, was Lynch's first project to reflect the panoramic range of interests that influence his working life as a musician. During these years he documented cross-cultural investigations with Eddie Palmieri's seminal Afro-Caribbean Jazz Octet on Palmieri's Palmas, Arete and Vortex [Nonesuch and RMM]. As the 90s progressed, he steadily refined his concept, eventually collaborating with Palmieri as an arranger, co-composer and musical director. In a rare gesture, Palmieri took advantage of Lynch's pen on the recent albums La Perfecta II and Ritmo Caliente [Concord Picante]. The synchronistic nature of their relationship continued in 2006-7 with a series of duo and trio concert performances, the debut of the Eddie Palmieri / Brian Lynch Jazz Quartet in Japan, and Palmieri's culminating (and Grammy winning) collaboration with Lynch on his ambitious recording project Simpatico for ArtistShare.