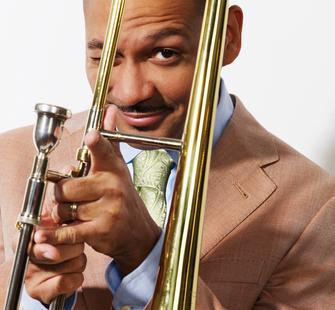 "One of the best, most imaginative and musical of the trombonists of his generation" — The San Francisco Examiner

One of the top jazz trombonists performing today, Delfeayo Marsalis has won multiple Grammy Awards for his musicianship. He is equally accomplished as a producer and arranger: from the age of 17 until the present, he has produced over 100 recordings for major artists including Harry Connick, Jr, Spike Lee, Nicholas Payton, and for his brothers Ellis, Branford, and Wynton Marsalis. As a bandleader, he has earned wide acclaim, especially for his albums Pontius Pilate’s Decision (1992), Musashi (1997) and Minions Dominion (2006). He brings all of his talents to bear on his most ambitious project yet: Sweet Thunder. Using the Duke Ellington/Billy Strayhorn suite Such Sweet Thunder as his point of departure, Marsalis has created a fresh, new musical composition for his eponymous octet.