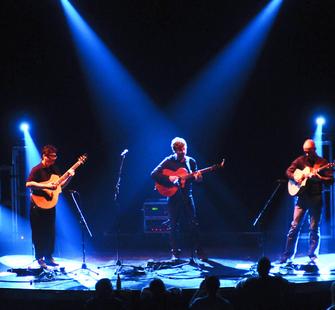 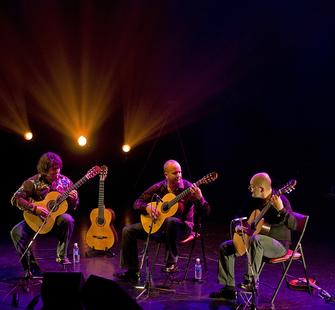 The California Guitar Trio is made up of Bert Lams, Hideyo Moriya and Paul Richards.  Together, their technical wizardry is breathtaking, as is the wide range of instrumental music the group renders….everything from unique originals to dazzling, cleverly-arranged interpretations of jazz, classical music and even surf rock. They create music, which sounds like it is performed on a kind of “super-piano” and at other times unfolds in an ethereal, otherworldly psychedelia.  In space, CGT’s music was played to wake the astronauts aboard the NASA space shuttle “Endeavor”.  Here on Earth, the trio’s music has been featured extensively on NPR, NBC’s Olympics coverage, and various CBS, CNN and ESPN TV programs.

Celebrating their twentieth anniversary in 2010  with the release of their 13th album, Andromeda represents a culmination of all their work together for the past 20 years.

The Montreal Guitar trio Has quickly established itself as a force of rejuvenation and cross-pollenization between various musical forms. Marrying passionate virtuosity with a stealthy sense of humor, guitarist Glenn Levesque, Mark, Morin and Sebastian Dufour at once charmed the ears of seasoned critics and captured the hearts of their ever-expanding audiences.  In 2002, the group was nominated for Concert of the Year at the prestigious Prix Opus 2002, which celebrates musical excellence in Quebec. The Trio's second album, Garam Maram Masala, was also nominated for Disc of the Year.