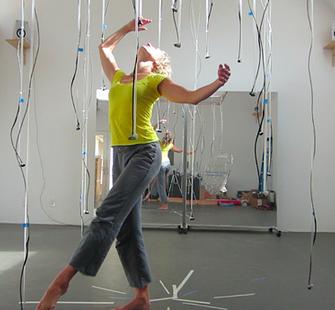 Body Envelope comprises a six foot square interactive sound chandelier suspended in the center of the Main Hall of Montalvo’s historic Villa. Translucent tubes, wires and sensors are hung from the ceiling to create an amoeba-like three dimensional envelope large enough for one body to move inside. Some sensors respond to the slightest bodily movements, others must be reached for conscientiously. When entered and played, Body Envelope will surround a body with sounds selected from wide reaches of experience, including animal, human and machine.

For this iteration of Body Envelope, Waisman has created a new soundscape drawing on site-specific and historic sounds connected to Montalvo. These include vintage cylinder recordings from the 1920s and sonic echoes of the high-life led by Senator Phelan and his guests at Villa Montalvo, mashed-up with the sometime-discordant sounds of life outside that dream-like bubble. Each visitor who interacts with Body Envelope will compose a shifting sonic cosmos as she tries to trigger particular kinds of sounds, which then change in pitch, speed, volume and spatialization, in relation to her movements.

Waisman will activate Body Envelope with a special dance performance she has developed in collaboration with New York-based choreographer Mariah Maloney, and Los Angeles-based choreographers, dancers and artists Natalie Metzger and Flora Wiegmann while in residence at Montalvo. Audience members will also be able to interact with and explore the piece. The performance will be followed by a Q & A with the artist and her collaborators.

Selected as a 2012 Lucas Artists Program Visual Arts Fellow, Waisman is a visual and media artist, with a background in dance, who works with technologically driven forms of control and communication. She creates and exhibits interactive, gesture-driven sound installations and performances. As a former dancer, she is especially interested in the role movement plays in forming our thoughts.

See a video interview with Nina Waisman about her work on our blog here.

This event is organized in collaboration with ZERO1 as part of 9 evenings: 2012 ZERO1 Biennial Performance Program.