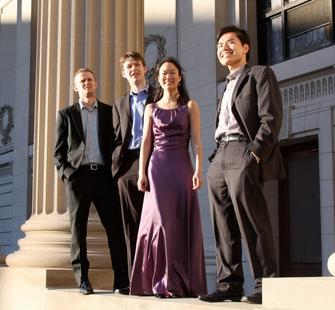 “Precision, assertiveness and vigor are great qualities in a young ensemble…the Amphion has mastered them” – New York Times

Hailed for its “precision, assertiveness and vigor,”the Amphion String Quartet is a winner of the 2011 Concert Artist Guild Victor Elmaleh Competition. The ASQ was recently selected to join the roster of the Lincoln center’s Chamber Music Society Two for a three-year residency, beginning the 2013 season. The Quartet was also awarded 1st prize at the Hugo Kauder String Quartet Competition in New Haven, CT and 1st prize in the Piano and Strings category as well as the Audience Choice Award at he 2010 Plowman Chamber Music Competition held in Columbia, Missouri. Summer 2011 - The Quartet was the Protégé Quartet-in-Residence at Chamber Music Northwest, where the quartet had the opportunity to collaborate with artistic director/clarinetist David Shifrin, and they also performed at the OK Mozart Festival.

Violinists Katie Hyun and David Southorn, violist, Wei-Yang Andy Lin, and cellist, Mihai Marica, first joined together for a performance at Sprague Hall at the Yale School of music in Feburary 2009. The overwhelmingly positive audience reception at this concert was the inspiration behind their mutual desire to pursue a career as the Amphion String Quartet.