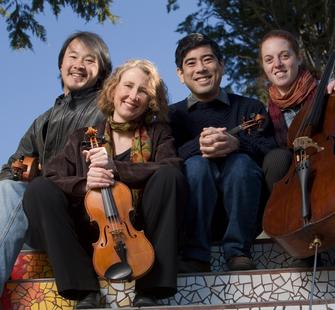 Del Sol String Quartet is known for introducing new work from prominent and emerging composers, collaborating with other musicians across cultures and genres, as well as presenting a Bay Area season concert series. The group is a two-time winner of The Chamber Music America/ASCAP Prize for Adventurous Programming and stands out as a group of pure invention. In 2008 the group premiered Spiral X: In Memoriam (for amplified string quartet) by Grawemeyer Award-winning composer Chinary Ung. As a result of this performance at the Library of Congress in Washington, D.C., the quartet has been invited to play at the Palaces of St. Petersburg Music Festival, to be held in Russia in June 2009, and will premiere a multimedia version of composer Michael Harrison’s Revelation (Best of Recordings 2007: New York Times, Boston Globe and Time-Out New York) at the Other Minds Festival in 2009. Other Minds Recordings has recently produced their new Ring of Fire CD to be released in August 2009.

Introduced in 1992, the quartet began in residence at the Banff Centre for the Arts, followed by a residency at San Francisco State University in association with the Alexander String Quartet. Other appointments have included the 2003 Emerging Quartets and Composers Residency with the Muir String Quartet and Joan Tower in Park City, Utah; Hot Springs Music Festival in Arkansas (2004-05); and quartet-in-residence at University of New Mexico.